The Linguistic Survey Of Sikkim: Mother Tongues In Education And Public Policy 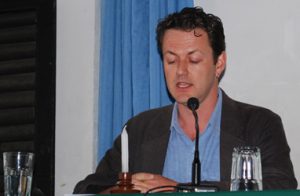 Mark Turin
on
The Linguistic Survey of Sikkim: Mother Tongues in Education and Public Policy

From September 2005 to November 2006, under the auspices of the Namgyal Institute of Tibetology and in close partnership with the Government of Sikkim, India, I directed the first phase of a modern linguistic survey of Sikkim. During the survey process, the research team visited 105 government and private secondary schools across Sikkim to administer an extensive questionnaire on language use to students in classes 8-12. The preliminary results of these 17,000 completed survey forms offer insights into the process of language shift from indigenous mother tongues to regional vernaculars, the growing importance of linguistic heritage and feelings of group belonging over actual competence in specific languages, and the symbolic and practical steps taken by the state government to support linguistic diversity in Sikkim. In this talk, the results will be presented in a visual manner to be of interest to a wide audience and stimulate debate. A discussion of the role of minority languages in Sikkim’s schools and public administration, together with an analysis of the position and rights of Sikkim’s indigenous communities, is particularly salient in light of Nepal’s constitution-writing process and the Linguistic Survey of Nepal which commenced in March 2009.

Mark Turin is a linguistic anthropologist. He studied Archaeology and Anthropology at the University of Cambridge, and holds a PhD in descriptive linguistics from Leiden University where he was affiliated to the Himalayan Languages Project. He has held research appointments at Cornell and Leipzig universities. He served as Chief of Translation and Interpretation at the United Nations Mission in Nepal (UNMIN) from 2007 to 2008. At present, he continues to direct the Digital Himalaya Project which he co-founded in the Department of Social Anthropology at Cambridge in 2000, and is establishing the Ishi Project, an urgent global initiative to document and make accessible the oral literatures of indigenous peoples before they disappear without record. He writes and lectures on ethnolinguistics, visual anthropology, and oral history at the University of Cambridge.