The Iconisation Of Yogmaya Neupane 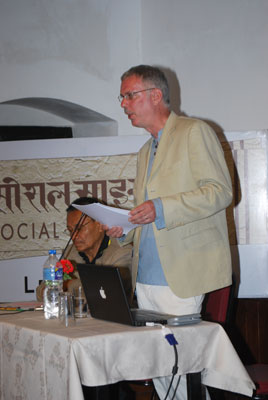 Michael Hutt
on
The Iconisation of Yogmaya Neupane

According to a popular tradition, on 14 July 1941, an elderly female religious ascetic named Yogmaya Neupane committed suicide by hurling herself into the raging Arun River in Bhojpur district of eastern Nepal. Sixty-seven other people followed her example, and none of their bodies was ever found.

On 8 March 2011, to mark International Women’s Day, a statue of Yogmaya Neupane was unveiled in the district headquarters town of Bhojpur. This was the latest development in an iconisation process that constructs and promotes Yogmaya as Nepal’s first female revolutionary.

This lecture will try to establish the facts of Yogmaya’s life, so far as this is possible, present and discuss a selection of verses from Sarvartha Yogabani, the text that is held to preserve her utterances, and then analyse the attempts that have been made by various activists and scholars to construct her as, variously, a feminist rebel, a social reformer, and a progressive poet.

Michael Hutt is Professor of Nepali and Himalayan Studies at School of Oriental and African Studies, London. He was Head of the South Asia Department from 1995-9, and has served as Associate Dean (2002-4) and Dean (2004-10) of the Faculty of Languages and Cultures.

The study of modern and contemporary Nepali literature is Hutt’s home ground, and he is well known as a translator. He has also published on Nepali politics, Nepali art and architecture, censorship in the Nepali print media, and the Bhutanese refugee issue. His publications include Himalayan Voices: An Introduction to Modern Nepali Literature (1991), Nepal in the Nineties: Versions of the Past, Visions of the Future (1994), Modern Literary Nepali: An Introductory Reader (1997), Unbecoming Citizens: Culture, Nationhood, and the Flight of Refugees from Bhutan (2003), and Himalayan People’s War: Nepal’s Maoist Rebellion (2004). His latest work is The Life of Bhupi Sherchan: Poetry and Politics in Post-Rana Nepal.

Prof Hutt is currently invoved in a research project on the construction of public meaning in Nepal.