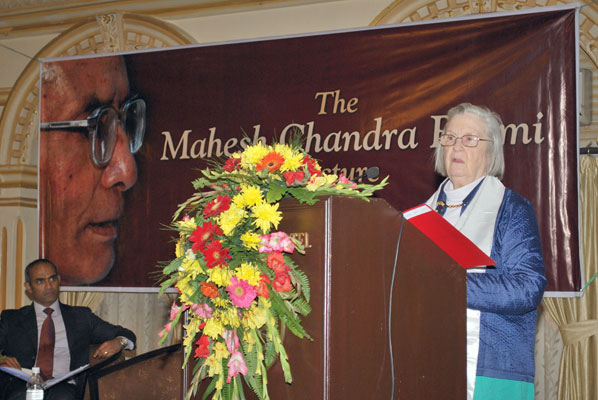 Institutions and Resources
by Elinor Ostrom

Elinor Ostrom is Distinguished Professor, Arthur F. Bentley Professor of Political Science, and Senior Research Director of the Workshop in Political Theory and Policy Analysis, Indiana University, Bloomington; and Founding Director, Center for the Study of Institutional Diversity, Arizona State University. She is a member of the American Academy of Arts and Sciences, the National Academy of Sciences, and the American Philosophical Society; and a recipient of the Sveriges Riksbank Prize in Economic Sciences in Memory of Alfred Nobel 2009, Reimar Lüst Award for International Scholarly and Cultural Exchange, the Elazar Distinguished Federalism Scholar Award, the Frank E. Seidman Distinguished Award in Political Economy, the Johan Skytte Prize in Political Science, the Atlas Economic Research Foundation’s Lifetime Achievement Award, and the John J. Carty Award for the Advancement of Science.Prof Ostrom’s books include Governing the Commons (1990), Rules, Games, and Common-Pool Resources (1994, with Roy Gardner and James Walker), Local Commons and Global Interdependence: Heterogeneity and Cooperation in Two Domains (1995, with Robert Keohane), Trust and Reciprocity: Interdisciplinary Lessons from Experimental Research (2003, with James Walker), The Commons in the New Millennium: Challenges and Adaptations (2003, with Nives Dolšak), The Samaritan’s Dilemma: The Political Economy of Development Aid (2005, with Clark Gibson, Krister Andersson, and Sujai Shivakumar), Understanding Institutional Diversity (2005), Understanding Knowledge as a Commons: From Theory to Practice (2007, with Charlotte Hess); and Working Together: Collective Action, the Commons, and Multiple Methods in Practice (2010, with Amy Poteete and Marco Janssen).