From Liberal Democracy To Authoritarian State: A Tale Of Constitutional Evolution In Sri Lanka And Possible Lessons For Nepal 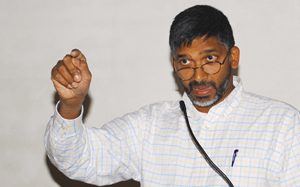 Arjun Guneratne
on
From Liberal Democracy to Authoritarian State: A Tale of Constitutional Evolution in Sri Lanka and Possible Lessons for Nepal

In 1948, Sri Lanka achieved independence from Britain with a liberal Westminster-style constitution firmly in place. Sixty-one years and two more constitutions later, Sri Lanka, despite a strong tradition of democratic participation in government going back to 1931, has evolved into a strongly authoritarian state with most of the institutions it had inherited at independence, including an independent public service, an independent judiciary, a free media and a professional police force, in disarray. Parliament itself had become a shadow of its former self, wielding little power. An all-powerful presidency had emerged as the strongest institution of the state and a source of authoritarian rule that has stifled the country’s democratic freedoms.

The lecture aims to trace the constitutional evolution that has brought Sri Lanka to its present crisis of governmentality, discussing the extra-constitutional factors that have aggravated this situation and examining the reasons why the situation probably cannot be changed. It will deal each of Sri Lanka’s three constitutions in turn and the social forces behind them, and then, at the end, try to see what, if any, of this means for constitution-making in Nepal.

Arjun Guneratne teaches Anthropology at Macalester College, Saint Paul, Minnesota. He has been researching in Nepal since 1989 and has authored a number of articles and books, including Many Tongues,One People: The Making of Tharu Identity in Nepal (2002) and Culture and the Environment in the Himalaya (2009). He is also the editor of Himalaya, the Journal of the Association for Nepal and Himalayan Studies (ANHS). Among his current research interests is the emergence of an environmental movement in Sri Lanka, its roots in the period of British colonialism, and the way Sri Lankan environmentalism has been shaped by contemporary globalising processes.