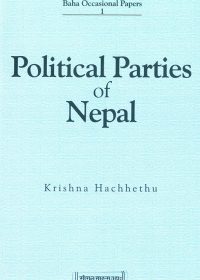 Following King Gyanendra’s assumption of executive powers on October 4, 2002, the multiparty system in Nepal, reintroduced in 1990 after three decades of partyless Panchayat regime, finds itself today in a state of uncertainty. From one perspective, the royal step may be viewed as a reaction to the failure of political parties and party governments on several fronts, particularly in dealing with the violent Maoist insurgency. The violent Maoist ‘people’s war’, which began in February 1996, has been intensifying rapidly and spreading all across the country. Both multiparty democracy and the mainstream political parties remain trapped between the far-Right forces led by the Palace on one side and the ultra-Left armed Maoists on the other. Against this background, this paper—organised into three sections—tries to review, both intensively and extensively, Nepal’s decade-long experience with the multiparty system. Section 1 has two components: a review of the political developments in the post-1990 period and brief profiles of the leading political parties. Section 2 focuses on the internal dynamics of individual political parties, such as party organisation, authority structure, factions, etc, from a comparative perspective. Section 3 deals with the convergences and divergences of political parties on ideological grounds and policy issues. It also analyses the positions of the parties on emerging political, social and economic issues.