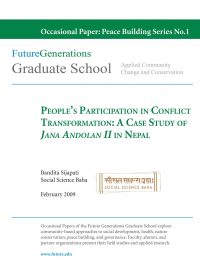 In April 2006, there was a country-wide people’s movement in Nepal, popularly known as the Jana Andolan II, against King Gyanendra’s direct rule following a 12-point understanding reached between the Seven Party Alliance and the Communist Party of Nepal (Maoist), which was leading a communist insurgency against the state. The 19-day-long Jana Andolan II (People’s Movement II) ended direct rule by Gyanendra, forced him to return power to the reinstated parliament, and created a conducive environment for the signing of the Comprehensive Peace Agreement (CPA) between the government and the rebel Maoists in November 2006. The success of Jana Andolan II in thus ending the decade-long conflict that had affected all parts of the country has thus been hailed by many as being exemplary of the ways in which engaged citizenry and communities at the local level can have an impact on the resolution and transformation of violent conflict at the national level.