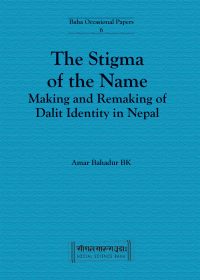 The Stigma of the Name: Making and Remaking of Dalit Identity in Nepal

In 2009, the Dalits of Ghachok in Kaski district, just north of Pokhara, began a protest against the upper castes, demanding equal access to a forest, the provision of drinking water to their community, and the initiation of secondary-level education in the village. Soon, questions about their identity and their history in Ghachok began to dominate interactions among the protesters. In particular, they wondered why they were called Dalits; when they had first settled in Ghachok; and why they were treated as untouchables. The underlying purpose of these enquiries was to justify their demand for equal access to a forest as well as to refute their status as low-caste ‘untouchables’.