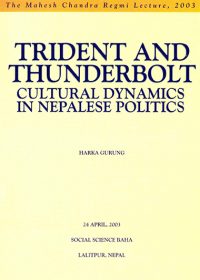 In ‘Trident and Thunderbolt: Cultural Dynamics in Nepali Politics’, Gurung takes a historical sweep of the development of the modern Nepali state making references to various points in history when caste and ethnic hierarchy and inequality were reinforced by the rulers using legal instruments.

Studying the contestation between and among the dominant lingual group and the other ethnic/ caste groups for socio-political and cultural space, Dr. Gurung argues that ethnic challenges arising in nation-building cannot be ignored. Whenever the socio-political context becomes favourable, they resurface and challenge the monolithic state. He calls for a ‘polycentric nationalism that fosters a feeling of belonging among all sections of society which in turn will promote national integration.’

Harka Gurung was born in Lamjung, Central Nepal, and went to military school in India. He earned a BA (hons) from Patna College, Patna, and a post-graduate diploma (1961) and PhD (1965) from the University of Edinburgh.

Gurung served at different times as member and vice-chairman of the National Planning Commission (1968-75), minister of state for education (1975-78), and minister of state for tourism, industry and commerce, public works and transport. He also worked in academia as demonstrator at the University of Edinburgh, a research fellow at the School of Oriental and African Studies at the University of London, lecturer at Tribhuvan University, and visiting fellow at the Population Institute/East-West Center.

Gurung authored numerous books including: Pokhara Valley: A Geographical Survey; Vignettes of Nepal and Annapurna to Dhaulagiri; A Decade of Mountaineering in Nepal Himalaya, 1950-1960; Janajati Serophero; From Exclusion to Inclusion: Socio-Political Agenda for Nepal; Faces of Nepal; Nature and Culture: Random Reflections; and Nepali Nationalism