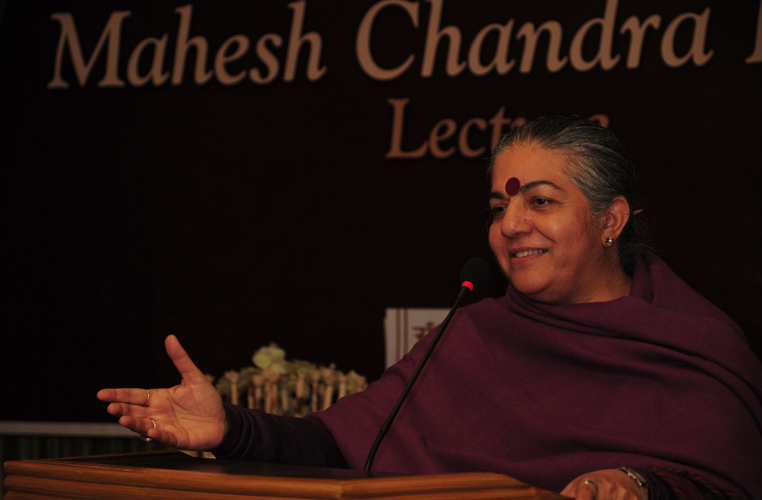 ‘Freedom’ has become such a contested term. We use freedom, corporations use freedom. We refer to people’s freedom to live and have livelihoods, to have access to vital resources—seed, food, water, land. ‘Free trade’ rules are written by corporations for their freedom to destroy people’s freedom to their lives and livelihoods, their cultures and democracies, by enclosing the commons, and commodifying and privatising every aspect of life. For example, the WTO-administered Agreement on Trade-Related Aspects of Intellectual Property Rights (TRIPS) imposes patents on seeds, allowing corporations like Monsanto to prevent farmers from saving seeds. Similarly, the WTO’s Agreement on Agriculture was written by Cargill, the world’s largest grain-trading corporation. This lecture will focus on the impact of these free trade agreements, and people’s movement to defend Seed and Food Freedom in times of Globalisation and Corporate Rule.

Vandana Shiva is a world-renowned environmental leader and recipient of the 1993 Right Livelihood Award (also referred to as the ‘Alternative Nobel Peace Prize’). Her contribution to diverse fields such as intellectual property rights, biodiversity, biotechnology, bioethics, genetic engineering has been two-fold: intellectual and through activist campaigns. Before turning to activism, Dr Shiva was a leading physicist, having conducted interdisciplinary research in science, technology and environmental policy at the Indian Institute of Science and the Indian Institute of Management in Bangalore.

Dr Shiva has played a major role in the global ecofeminist movement. She founded the gender unit at the International Centre for Mountain Development (ICIMOD) in Kathmandu and was a founding board member of the Women’s Environment & Development Organization (WEDO). She is a founding board member of the International Forum on Globalization (IFG) and is currently Director of the Research Foundation on Science, Technology, and Ecology in Dehradun, India.

Recipient of numerous awards for her services in human rights, ecology and conservation, Time identified Dr Shiva as an environmental ‘hero’ and Asiaweek has called her one of the five most powerful communicators of Asia. She has written extensively on a variety of environment issues and authored several bestselling books. Her recent publications include books such as Making Peace with the Earth: Beyond Resource, Land and Food Wars (2012), Staying Alive: Women, Ecology, and Development (2010), Soil Not Oil: Environmental Justice in an Age of Climate Crisis (2008), and Earth Democracy: Justice, Sustainability, and Peace (2005). She has also starred in documentaries such as ‘Dirt: The Movie’ (2009) and ‘The New Rulers of the World’ (2001).