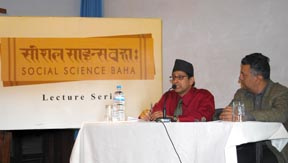 Recently in Nepal, fashionable postmodernism has significantly influenced the realm of development studies as post-development. Although post-development has been subjected to devastating critiques by all standards on account of its political, economic, and historical romanticism, it still wins out in the marketplace for ideas and even critics praise its methodological challenge posed by various post-developmentalisms. The lecture argues that the cognitive relatism inherent in postmodernism cannot be a serious approach to investigate development problems, especially in countries like Nepal which can ill afford such self-indulgent, esoteric, and ideologically driven discourse. Examples abound in Nepal of postmodern scholarship which upon closer inspection can be viewed as identical to colonial ideology and discourse (e.g., the use of gender, social capital, peace-building, empowerment, democracy, and a million other buzzwords that have little if any empirical or historical basis). A closer look at the intellectual divide in the social sciences between Hegelianism on the one hand and positivism and empiricism on the other can help us understand why this ideology (although self-proclaimed to be progressive and an alternative critical perspective) is so pervasive and also why universal reason needs to be defended.

Ravi Bhandari is Associate Professor of Economics at Saint Mary’s College in California and has been recently named to a three-year term holding the Chevron Professorship in Development Economics & International Political Economy. He has taught at and received distinguished teaching awards from the Universities of San Francisco, Hawaii, and most recently University of California at Berkeley before joining Saint Mary’s, where he was tenured in 2007. His teaching and research interests are in economic development and the development of economics. Bhandari has published in leading international journals such as the Journal of Developing Societies, Journal of Economic Studies, Review of International Political Economy, and Sociological Bulletin. Professionally, he has worked as an economic consultant in Nepal during much of the 1990s for various international development organisations, and most recently the World Bank, evaluating various land reform proposals. Currently, Bhandari is a Fulbright Senior Scholar in Nepal exploring the causes and consequences of inequality on the prospects of sustained democracy and development drawing not only on the recent experience of Nepal but also other failed and/or post-conflict states including Afghanistan, Sudan, Kosovo, Congo, Cambodia, and Guatemala. He is also currently a Visiting Professor at Kathmandu University’s School of Management and Tribhuvan University in Nepal.

Prof Bhandari’s lecture was derived partly from the following:
From Political Economy to Economics: Method, the Social and the Historical in the Evolution of Economic Theory, Routledge Press.
Samir Amin. 2005. Empire and Multitude: Post-Imperialist Empire or Renewed Expansion of Imperialism. A Book Review of Hardt and Negri’s books. Monthly Review. November. Volume 57 (6).