Chittadhar Hridaya’s Sugata Saurabha: The Known And Unknown In The Composition Of The Epic 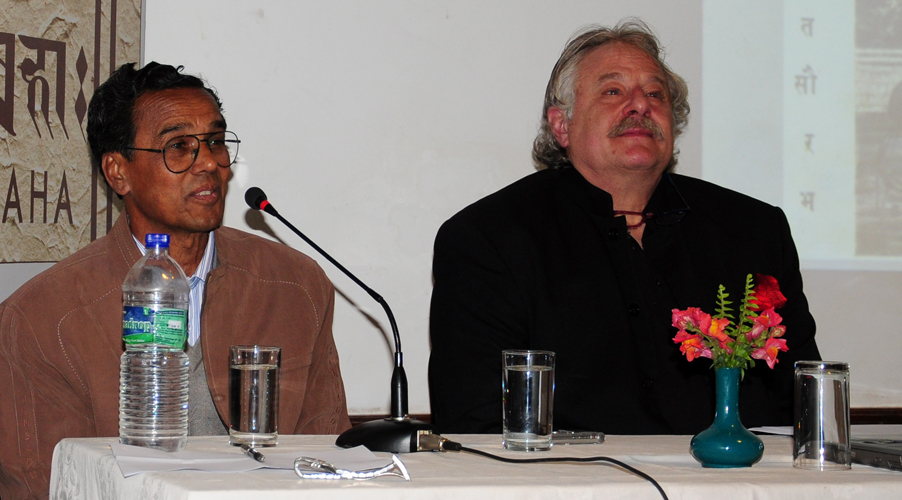 Todd Lewis and Subarna Man Tuladhar
on
Chittadhar Hridaya’s Sugata Saurabha: The Known and Unknown in the Composition of the Epic

Demonstrating to what extent the Indic cultural world was alive for the traditional Newar elite in mid-20th-century Nepal, this lecture will explore a variety of topics ranging from the narrative richness in Sugata Saurabha, among the greatest works of modern Himalayan literature, to the impact of this work and that of other authors who were imprisoned by the last Rana rulers.

Chittadhar Hridaya’s 19-chapter narrative of the Buddha’s life is remarkable not only for its doctrinal erudition and the artistry of its rhythmic patterns and end rhymes, but also in his enlivening the great sage’s life with details of Newar urban society and culture. The lecture will examine this text as a specimen of Buddhist modernity in Nepal, reflecting the author’s awareness of classical Sanskrit sources, Hindi translations from the Pali Canon, publications from the Mahabodhi Society, among other influences. Yet another level to be examined in the fabric of Sugata Saurabha’s narrative is how it is crafted to defend the integrity of Newar culture and offer positive critical pronouncements on life in Nepal.

The final portion of the talk will discuss how authors like Chittadhar and others suffering imprisonment emerged to ignite a renaissance in the cultural life of Nepal and also point to what is still not known about the author and this masterpiece of modern world literature. The lecture will conclude by arguing that Sugata Saurabha deserves a place among the great literary accomplishments of Buddhist history.

Todd Lewis is Professor in the Religious Studies Department at the College of the Holy Cross, Worcester, Massachusetts, where he has taught since 1990. Having done research in Nepal beginning in 1979, Prof. Lewis is an authority on Buddhism in the Kathmandu Valley, particularly the traditions found among the Newars. Author of several dozen scholarly articles and book chapters, his books include The Himalayas: A Syllabus of the Region’s History, Anthropology and Religion (1995), Popular Buddhist Texts from Nepal: Narratives and Rituals of Newar Buddhism (2000), and the co-authored textbook, World Religions Today (now in its 4th ed) (2011).

Subarna Man Tuladhar is Professor of Administration at the Administrative Staff College in Patan, Nepal, where he also serves as Director. A former Under-Secretary who served the Government of Nepal, Prof. Tuladhar holds a Post-graduate Diploma in English as a Foreign Language from the University of London and in Social Planning from the London School of Economics. For 30 years a language teacher who has taught Newari to several dozen scholars, he has also written over 150 articles in English, Nepali, and Newari on various aspects of social development, public service training, and language teaching. His most recent book is on language instruction, Nepal Bhasa Senegu Kalabidhi (in Newari) (2007). Prof. Tuladhar is currently associated with the Nepal Bhasa Institute as a member of its teaching staff and curriculum development committee.