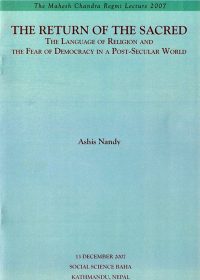 The Return of the Sacred: The Language of Religion and the Fear of Democracy in Post-Secular World

The nineteenth-century European dream of continuous, irreversible decline of religion in the twentieth century did not prepare modern political and social theories, particularly contemporary theories of democracy, for a world in which religion has re-emerged as a post-modern phenomenon seeking to fill a void in private and public life. Important sections of the citizens have begun to see in religion ways of fighting the hazards of extreme individualism, loneliness, economism, and consumerism. They have made new demands on the modern state system that have disoriented the ruling elites in many democracies who seek to contain the demands by setting up garrison states.

Ashis Nandy is a political psychologist and sociologist of science. He is a former Director of the Centre for the Study of Developing Societies, Delhi, and is presently an Indian Council of Social Science Research Fellow there. Nandy has had a long and prolific career illuminating an extraordinary number of subjects, including political psychology, mass violence, cultures and politics of knowledge, and utopias and visions. He has also written on the history of science and technology, the nature of the post-colonial state, alternatives to ‘development’, alternate politics, the role of religion in society and the game of cricket in India. He has been a Woodrow Wilson Fellow at the Wilson Center, Washington DC; a Charles Wallace Fellow at the University of Hull; and a Fellow of the Institute for Advanced Studies in Humanities, University of Edinburgh. He also held the first UNESCO Chair at the Center for European Studies, University of Trier, in 1994.He is the author of, among others, The Savage Freud and Other Essays on Possible and Retrievable Selves (1995), The Illegitimacy of Nationalism: Rabindranath Tagore and the Politics of Self (1994), At the Edge of Psychology: Essays in Politics and Culture (1990), and The Intimate Enemy: Loss and Recovery of Self Under Colonialism (1983). His most recent book is A Very Popular Exile (2007).