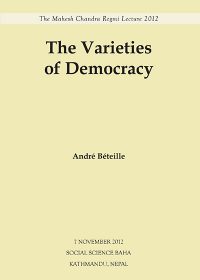 The Varieties of Democracy

Even though its basic tenets remain the same, democracy has manifested in many different forms the world over. This lecture examines variations in democracy in different countries through the lens of institutions in place such as political parties, the government, the opposition, and so on. It elaborates on the many characteristics of opposition in democracies, including the role of social movements in serving as a platform of dissent, while emphasising the different aspects of democratic reasoning as the pre-requisite for the successful operation of democracy. By way of example, the lecture outlines the evolution of democratic practice in India down to the current upsurge in civic protests. Contrasting the role of India’s social movements with that of the political parties in the country’s polity, the lecture argues that it is the capacity to constantly adapt that makes Indian democracy distinct. With its sound historical grounding, appreciation of the theoretical framework of democratic institutions, and vivid examples of constitution-making, the lecture will be highly relevant in Nepal’s current political context.

André Béteille, Professor Emeritus in the Department of Sociology at Delhi University, was formerly Chair of the Indian Council of Social Science Research. He was made National Research Professor in 2006, Corresponding Fellow of the British Academy in 1992, and is an Honorary Fellow of the Royal Anthropological Institute. His research and writings have focused on social inequality, especially the relationship between caste, class, and power, and also explored the theme of inequality in agrarian social structures arising from the ownership, control, and use of land. His later writings have focused on institutions and processes.

Professor Béteille is one of India’s leading sociologists and writers. He is the author of many books, including Democracy and Its Institutions (2012), Marxism and Class Analysis (2007), Ideology and Social Science (2006), Equality and Universality: Essays in Social and Political Theory (2002), Antinomies of Society: Essays on Ideologies and Institutions(2000), Inequality among Men (1977), Studies in Agrarian Social Structure (1974), and Caste, Class and Power: Changing Patterns of Stratification in a Tanjore Village (1965).