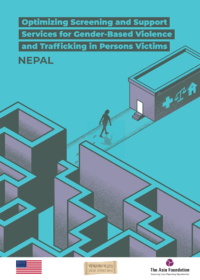 Spread across three countries in South Asia—India, Nepal, and Sri Lanka—this research project aimed to identify promising practices and challenges in integrating or separating services for victims of human trafficking and gender-based violence (GBV) with the ultimate goal of improving services to the victims in a variety of contexts. Violence against women in Nepal is pervasive and occurs in both the private and the public spheres. GBV is one of the leading causes of trafficking in Nepal, along with domestic violence, dysfunctional family, separation from family, critical poverty, and traditional practices such as child and forced marriages. Victims of trafficking, in turn, face different forms of violence across different stages of trafficking. In regards to the focal research question on the possibility of integrating or separating services, the qualitative data gathered from different stakeholders; government officials, service providers, and survivors, in Nepal, resulted in differing opinions. It was noted that services such as healthcare, psychosocial counseling, livelihood, and capacity development training could be integrated ensuring parity for both sets of victims. Most survivors were in support of the integration of services, owing to the emotional support the two kinds of victims are likely to provide each other when staying together. However, government officials, including law enforcement officials, were divided in their views on the services’ integration mainly because of concerns over the possibility of GBV victims being subjected to stigma if placed together with victims of TIP.