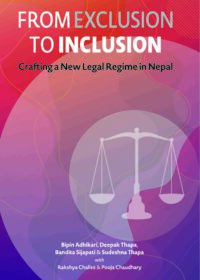 From Exclusion to Inclusion: Crafting a New Legal Regime in Nepal

Nepal is changing. The most pressing issue facing the country in its recent history has arguably been that of the exclusion of women and various social groups from the mainstream of state and society. In fact, the story of their marginalisation in all spheres of public life—social, political, economic, and cultural—has been the dominant feature of the political discourse in the country for over two decades. At the same time, however, it has also led to some of the most momentous changes in the relationship between the State and the citizenry, more specifically, in how various legislative devices have been introduced to ensure that previously excluded groups are brought into the mainstream of the Nepali polity and society. It is this transformation over time that this book attempts to capture.