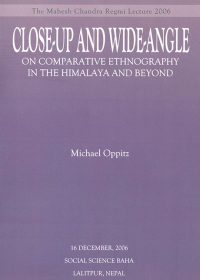 Close-up and Wide-angle: On Comparative Ethnography in the Himalaya and Beyond

Anthropologists who conducted research in the Nepal Himalaya usually chose a single, often remote locality and stayed with this place until the end of their days. ‘Their village’ became the centre of the world and thanks to the rugged topography of the country, there was ample space for many researchers to select and defend their own local universe. This is why many of the Himalayan ethnographies have an atomistic appearance, which, for our knowledge of local cultures, is elementary. But no place is so remote as not to entertain relations with neighbouring local cultures. And so, they influence one another. Such influences can be detected in material products such as implements, artefacts and religious paraphernalia, as well as in the immaterial heritage such as ideas, concepts and myths. Cultural similarities beyond the local universe may be explained by common linguistic roots, trade relations or migration movements. But they also exist where such explanations fail. The lecture aims to present some examples of such unexplained similarities covering astounding distances in the Himalaya and beyond while suggesting a way of dealing with them through comparative ethnography.

Michael Oppitz studied at the Universities of Berkeley, Bonn and Cologne. He did his first fieldwork in Solu Khumbu, where he found some old documents on the history of the Sherpa. He showed these to Mahesh Chandra Regmi (in 1965), who helped him with other source materials and encouraged him to publish his findings, making him an author at the age of 23. After finishing his studies, he went to the Northern Magar to study their local shamanic religion. The outcome was a four-hour-long documentary, Shamans of the Blind Country. The other major result of his study of the Magar is Uncle’s Daughter No One Else. He has taught in Paris (the Sorbonne); Berlin (The Institute of Advanced Study) and the (the University of Texas and New York University).