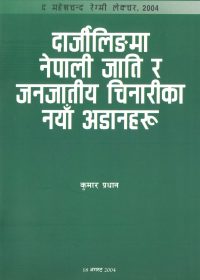 In दार्जिलिडमा नेपाली जातियता र वर्तमान केही जनजातीय अडानहरु (‘Nepali Ethnicity in Darjeeling and Some Current Ethnic Stances’), Pradhan follows the historical trajectory of the Nepali migration into Darjeeling. Travellers’ accounts and local annals from the 19th and early 20th centuries attest to centuries-old migrations into the area by today’s Nepali ethnic groups. Pradhan notes that the majority of the Nepali settlers there belonged to the proletariat.

The majority of these migrants belonged to the numerous matwalis groups, and despite their ethnic differences, these settlers forged a common Nepali ethnic identity. Pradhan explains how the process of Nepali identity creation in Darjeeling differed fundamentally from that in proper. In Nepal, the process was state-imposed and ideologically driven to create a monolingual unity at the expense of the ethnic cultures. In contrast, the process in Darjeeling occurred at the grass-roots. In this historical context, one would assume the Nepali identity in Darjeeling to be more resilient than that in Nepal.

However the post-1990 ethnic revivalism in Darjeeling, following a similar resurgence in Nepal, has put an end to such a notion. Numerous ethnic organisations have sprung up, but Pradhan concludes the lecture with reasons to suggest such a dissolution may not in fact take place. According to him, the Nepali language and the common historical destiny of the Nepali people there are the pivotal binding forces for the continued existence of a collective Nepali identity.

Kumar Pradhan received his PhD in history from Calcutta University and served on the Department of History, Darjeeling Government College, from 1966 to 1984 when he took over as the principal of Kurseong College, Kurseong. He is the author of The Gorkha Conquests: The Process and Consequences of the Unification of Nepal with Particular Reference to Eastern Nepal.

Pradhan is also an eminent writer and critic who has edited a number of literary journals and anthologies and published learned articles in Nepali. He is the author of A History of Nepali Literature (1984), published by the Sahitya Akademi, New Delhi, in the Sahitya Akademi Histories of Literature Series. His work, Pahilo Pahar (1982), was awarded the Bhanubhakta Puraskar for 1983 by the Nepali Academy instituted by the Government of West Bengal. He received the Nepali Sahitya Sammelan Puraskar awarded by the Nepali Sahitya Sammelan in 2002, and the Aam Smriti Puraskar, an award given every three years for contributions to the Nepali language and literature, instituted by Nepali Sahitya Parishad of in 2003.

After retiring from teaching in 1993, he started publishing and editing the Nepali-language daily Sunchari Samachar.