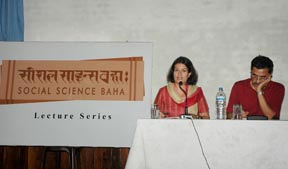 Susan Hangen
on
Racial Thinking in Nepal: Origins and Contemporary Political UsesThis presentation examines the origins and uses of various ideas about race that circulate in Nepal. Most social scientists have focused more on caste and ethnicity, than on race in the Nepali context. It argues that racial ideas play a significant role in shaping the ways that people think about social differences and identities in Nepal. First, I review the dominant anthropological view of race as a socially constructed and scientifically invalid concept. Then I examine racial concepts that circulate in Nepal, including ideas of Nepal’s population as divided into Mongols and Aryans and the concept of martial races. The lecture asks how these racial discourses influence representations of social difference that uphold patterns of social inequality, and explores how and why one organisation in the indigenous nationalities movement, the Mongol National Organization, adopted the term ‘Mongol’ as a political identity. I argue that this organisation was able to use race in an oppositional way, partially because the Nepali state never used racial categories to define its population. I conclude by encouraging other researchers to examine racial representations in popular media.

Susan Hangen is Associate Professor of Anthropology and International Studies at Ramapo College, New Jersey, USA. She has conducted research on ethnic politics in Nepal since 1993, in Ilam and Jhapa districts as well as in Kathmandu. She is the author of Creating a New Nepal: The Ethnic Dimension (2007) as well as of several articles on ethnic politics in Nepal. She is currently completing a book called Democracy in the Margins: The Rise of Ethnic Politics in Nepal. Her current research focuses on transnational politics among Nepalis in New York City, where she now lives.