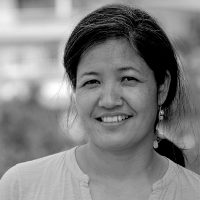 Sita Mademba, is a journalist who has been working in various media houses including BBC Nepali service for over fifteen years. She is an MPhil candidate in anthropology and has an MA in Political Science. She has published several articles and a book chapter. Her articles have appeared in Kantipur, Nagarik, Himal Khabarpatrika, and Nepali Times. She has received various fellowships and awards including Creative Journalism 2009, Investigative Journalism 2016, the Youth Empowerment Award 2017, and Jana Sewa Shree Pancham 2019 from the president of Nepal.