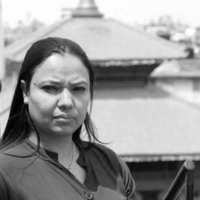 Binita Magaiya, MA, is an architect specializing in the conservation of monuments and heritage structures. She completed her master’s from Katholieke Universiteit Leuven in Belgium with a degree in Conservation of Monuments and Sites. She recently finished the project to reconstruct Kasthamandap, a city icon in itself. Located in the heart of Kathmandu, Kasthamandap (whose name means ‘wooden pavilion’) is a three-story public rest house that dated to the seventh century and contains a shrine consecrated to Gorakshanathin. The structure had collapsed entirely during the Gorkha earthquake on the 25th of April, 2015 and re-opened again to the public in April of 2022. A former heritage activist, Binita is now engaged in the preservation of intangible heritage via her work as a storybook writer for children. She is also a co-founder of Baakhan Nyane Waa (Come, Listen to Stories!), a non-profit organization that documents and converts oral histories and stories into illustrated children’s books.

Within Heritage as Placemaking, Binita is a research assistant based at Social Science Baha. Her project looks at Mukundapur, a historic, ‘forgotten’ ruin that is geographically located in the inner plains of Nepal between Lumbini and Kathmandu, with strong art historical ties to India.