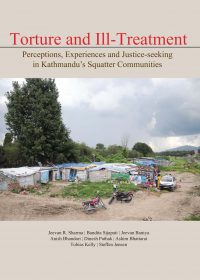 The poor are vulnerable to violence. They lack the resources necessary to report violations and seek justice. Based on a household survey carried out in squatter communities in Kathmandu, this report highlights the perceptions and experiences of torture and ill treatment among low-income population groups as well as the way in which they seek justice. The findings suggest that the vulnerability of residents from squatter settlements to torture and ill-treatment is directly linked to their specific precariousness resulting both from their lower socio-economic background and lack of land rights. The survey shows that this group of people view the police, political actors and formal organisations as major sources of torture and ill-treatment. Paradoxically, they also tend to exhibit a high degree of reliance on the same group of institutions and individuals for any form of recourse to justice, and a relatively low number seek the support of human rights organisations and other NGOs.