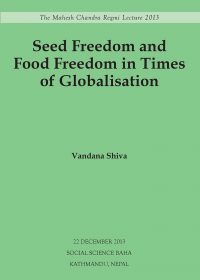 Dr Shiva was a recipient of the 1993 Right Livelihood Award (also referred to as the ‘Alternative Nobel Peace Prize’). Her contribution to diverse fields such as intellectual property rights, biodiversity, biotechnology, bioethics and genetic engineering has been two-fold: intellectual and through activist campaigns. She has played a major role in the global ecofeminist movement. She was a founding board member of the Women’s Environment & Development Organization (WEDO) and also of of the International Forum on Globalization (IFG). She founded Navdanya, an organisation she founded to work in rejuvenating indigenous knowledge and culture.

Dr Shiva has written extensively on a variety of environment issues. Her recent publications include books such as Making Peace with the Earth: Beyond Resource, Land and Food Wars (2012), Staying Alive: Women, Ecology, and Development (2010), and Soil Not Oil: Environmental Justice in an Age of Climate Crisis (2008).