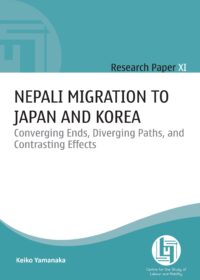 Japan and South Korea hold the same goal of preventing unskilled foreigners from settling down while implementing different immigration policies. This paper documents the migration experiences of Nepali workers in the two countries from the early 2000s to the late 2010s to explain the divergent paths and contrasting effects of the converging immigration policies adopted by these two states. In Japan, Nepali migrants relied on existing social and business networks to cross borders and work as skilled cooks and Japanese language students. With a growing contingent of dependents, the Nepali population there is halfway through building a semi-permanent resident community. In South Korea, predominantly unaccompanied Nepali males arrive as sojourning labourers under the state-run Employment Permit System, which guarantees transparency, fairness, and equality in migration and employment but in reality functions as a global labour rotation scheme. In contrast to the host country’s goals, Nepali migrants persevere in a lonely life, dreaming of the day they return to the homeland with a large sum of money. The paper ends with a discussion of possible solutions to the contrasting effects of the divergent paths taken by each country.