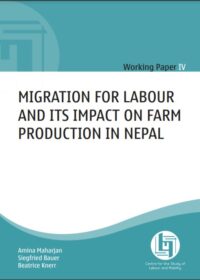 Migration for Labour and its Impact on Farm Production in Nepal

Even though Nepal is predominantly an agrarian country, migration is increasingly becoming an important livelihood strategy for farm households in rural Nepal. Migrants head out to various destinations, which, for the purpose of this study, have been broadly categorised into India and overseas. Despite the rise in this phenomenon, little is understood about the impact of migration on farm production. Using primary data generated through a household survey, this paper attempts to contribute towards a better understanding of the impact of migration on the labour and non-labour inputs used and production outputs in rural farm families in Syangja and Baitadi districts in the hills of Nepal. While the impact of migration on farm production differed between the two regions the findings of the study suggest that most farm households tend to neglect subsistence farming altogether in the presence of alternative sources of income. Additionally, when the household income is insufficient farmers show more interest in livestock farming than in crop farming. Furthermore, the results of the study indicate the increasing feminisation of the agricultural sector in the hills of Nepal.