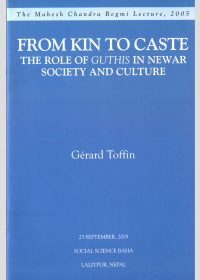 From Kin to Caste: The Role of Guthis in Newar Society and Culture

Guthi associations played a considerable role in the development of the civilisation of the Nepal Valley and still play a pivotal role in Newar society. Of particular importance are the associations devoted to the cult of divinities and the death societies. Anthropologically speaking, guthis cover a wide range of social groupings, from caste to kin, giving a preponderant position to territory. Though guthis are a distinctive feature of the Newars in Nepal, such type of associations are widespread all over the world. Gerard Toffin points to some parallels in the Himalayan belt, and mediaeval Europe. They are in most cases adapted to complex urban societies, but they are sometime the descendants of old farmer’s organizations linked with the local religion.

Gérard Toffin is Director of Research at CNRS (National Centre for Scientific Research, Paris), and Professor of Nepali Civilization in the National Institute for Oriental Languages and Civilisations, Paris. He is also a member of the Scientific Committee for the French Research Centres in Asia under the Ministry of Foreign Affairs, Government of France. Toffin is an outstanding anthropologist, with over 35 years of excellent research on , and a good friend and well-wisher of the country. He has been doing research in since 1970 when he first came to to work as Cultural Attaché at the French Embassy. Since then, in addition to his own research on the Newars of the Kathmandu Valley and the Tamangs of west , he has directed, edited and participated in various anthropological research and publishing projects in his country. Toffin’s important works include Pyangaon, une communauté néwar de la vallée de Katmandou (Paris, 1977), Societé et religion chez les Néwars de la vallée de Katmandou (Paris, 1984), Le Palais et le Temple: La fonction royale dans l’ancienne vallée du Népal (Paris, 1993) and the edited volume, Nepal: Past and Present (Delhi, 1993). This year he published La quete de l’Autre: L’ethnologie d’hier à aujourd’hui (Solar, 2005) in which he puts into perspective the development and changes in Western anthropology over the last few decades. Toffin has lectured at Harvard, Oxford and the School of Oriental and African Studies (SOAS), of the University of London, among other institutions. In 2000 he delivered the Radhakrishnan Memorial Lecture, at All Souls College, Oxford University, where he spoke on the topic ‘From city to village: Society and religion among the Newars of the Kathmandu Valley’.