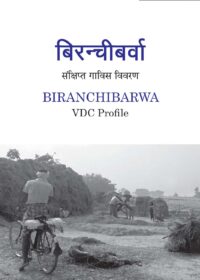 The University of Oxford and the Centre for the Study of Labour and Mobility (CESLAM) with the help of Divya Youth Club, Parsa, conducted a study in February and March 2014 entitled ‘Labour Migration: Impacts on Households in Parsa’. The study was undertaken in an effort to uncover the nuances associated with migration in the Tarai region. The study (hereafter, Parsa Study 2014)covered all the households in three village development committees (VDCs) of Parsa  District, namely,  agwana, Biranchibarwa and Jhauwa Guthi, with the principal objective of collecting data on the current trends in and the history of the migratory process from these VDCs. Besides providing a general overview of migration, Parsa Study 2014 also covered area such as reasons for migration, professions in the countries of destination, methods of remittance transfer and socio-economic impacts of migration, among others. This paper discusses the findings from Biranchibarwa. This report discusses the findings of the study as they pertain to the VDC of Biranchibarwa and where applicable refers to the data from the National Population and Housing Census 2011 to present a more time sensitive depiction of the VDC.