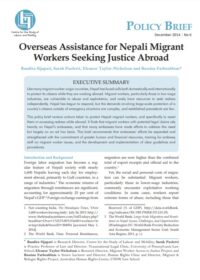 Like many migrant worker-origin countries, Nepal has faced calls both domestically and internationally to protect its citizens while they are working abroad. Migrant workers, particularly those in low-wage industries, are vulnerable to abuse and exploitation, and rarely have resources to seek redress independently. Nepal has begun to respond, but the demands involving large-scale protection of a country’s citizens outside of emergency situations are complex, and established precedents are few. This policy brief reviews actions taken to protect Nepali migrant workers, and specifically to assist them in accessing redress while abroad. It finds that migrant workers with potential legal claims rely heavily on Nepal’s embassies, and that many embassies have made efforts to address this need but largely on an ad hoc basis. This brief recommends that embassies’ efforts be expanded and strengthened with the commitment of greater human and financial resources, training for embassy staff on migrant worker issues, and the development and implementation of clear guidelines and procedures.